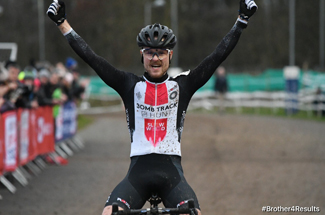 After his race in Meilen Gosse immediately traveled to England for the sixth round of the National Trophy Series in Shrewsbury.

Sponsor Hunt Wheels brought Gosse over to England, so he could race in Shrewsbury during the 6th round of the National Trophy Series. Gosse had a good start and got in front with 2 other riders. He managed to leave those 2 riders behind and went looking for the win. After all the bad luck of the last weeks Gosse was rewarded with the victory, a good confidence boost with the nationals coming up.

“It is my first European UCI victory, so I am very happy! It was an awesome weekend with the guys of Hunt Wheels. During my roadtrip they brought me almost all over England. To finish it like this is very, very nice. My first European pro victory, the second of this season!”, a happy Gosse commented after the race.