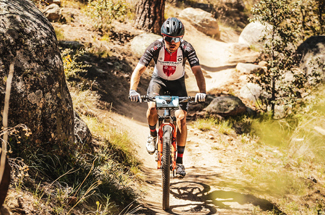 Cyclocross is coming, but before that Gosse is heading to Belgium for some road races. Read all about it in his new blog!

I am writing this blog on a rainy summer evening on the couch in my small home in Germany. Today Peter Sagan just beat Wout van Aert who almost won his first individual Tour de France stage! Every cyclocross rider has his own way to prepare for the season, where we see Wout van Aert being really well in the Tour de France we don’t see Mathieu van der Poel racing at the moment. He finished a block of mountainbike racing and will have other goals later in the summer.

Enough said about the two absolute captains of the ship that’s called cyclocross at the moment. My preparation for the season is also built with mountainbike and road races. I do these races on a different level as those two guys, but I am doing this program all on my own. Travelling to the races alone, racing without help at the races but with the same goals as Wout and Mathieu: to be good  during the winter months.

After a week off to focus on my exams I went to the Rursee marathon in Germany (got 3th) and one week later I was racing the marathon in Amerongen and the street race in Norg in the Netherlands (got second and first). The book of mountainbike racing will be closed for this year (but not put away (because you never know…)). In two days I will drive over to Belgium to stay there for a week to be racing on the road. A small stagerace is the perfect way to prepare for a cyclocross season, but unfortunately I was not able to be doing one with a team this season.

Because I don’t like to be depending of other teams in my preparation for the upcoming season I decided to register for a five races which are all around 120 km long. I will do these five races in a six day period so I can do my own little stagerace. It won’t be easy to ride against ‘’fresh’’ riders every day but I know the investment will be important towards my upcoming cross season!

The current plan is to race:

This will be my first block of road racing for this season and I plan to do another one later on in Juli! Stay posted because I will write another blog about my time in Belgium next week!